That was the end… 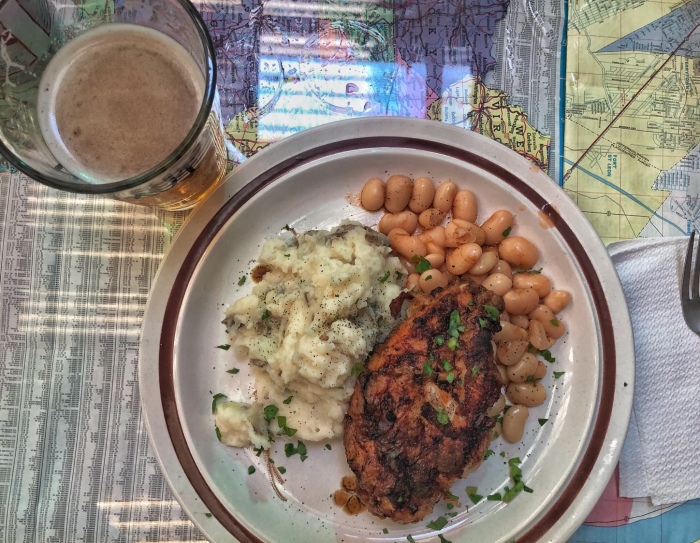 That was the last fried chicken Friday.

And that was the last Sunday special (fried chicken again).

There was a line out the door for his last day. I told Stu to save me a chicken breast and I went back two hours later when it was relatively quieter.

I brought the fried chicken nazi a bottle of bourbon because it fits the theme of the Southerness, because I know he likes bourbon, because I fucking love bourbon, and because bourbon is fucking good.

Especially Buffalo Trace, which I’ve had plenty before but never bought a bottle.

I drank half the bottle…

So you can imagine the type of Sunday I had.

All that was after a crazy Saturday with four white amigos. So even after retiring from tours, I’m still doing tours.

We went to Teléfonica because that’s what they love, then fuimos al BEIS (though the original plan was Hong Kong), and then, street tacos. When they were dropping me off at home, the cops pulled us over.

And we were let go.

Toros lost the match. But it was a fun game and my friends had fun. That’s what matters.

And oh boy is it hot out!

If you are new, welcome to my rambling, I go in every direction. I call it word vomit. Some people don’t like it. They don’t like that I swear either…

And because I swear here and there I’ve been called “Bukowskish.” I have never read him. Just his Wikipedia and snippets about him. He seems like a fun dude.

So make of this what you will. Just, please… PLEASE don’t fucking take me seriously.

Alright, back to it.

Fried chicken fried is no more. Stu retired the Voodoo Stu and Magic Mael Gumbo Shack. That’s the official name. It had a lot of funny little quirks. And if you weren’t a regular, you would probably be confused by the lack of menu (or the phony menu) or how the restaurant works. Or how it used to work…

And how it used to work… You bark your order towards Stu like Batman (that’s the restaurant’s old dog). Or be courteous and nice to Mael and asked her for food.

Just ask for food and drinks.

Enjoy. Not only the delicious fried chicken but the atmosphere. A pocket of Tijuana taken you far towards a swamp in Louisiana. Or more like a hipster place in Atlanta. Whatever you want it to be. It just didn’t feel like Tijuana. Though Tijuana never feels like anything but everything and not Tijuana.

Three years of that gumbo shack. I remember when it started. I was living with Chad. And him and Stu bonded immediately like brothers from another mother (both tracing their lineage to the south). And thus began the days of eating at Stu’s pretty much weekly.

Stu started mainly with gumbo. But that didn’t fly well with Tijuanenses who have never heard of the dish.

He used to also give it to you on paper plates to make it cheaper and not to deal with the hassle of cleaning.

Then came the fried chicken Fridays… and that became a staple.

So much, that Stu didn’t bother to open Wednesday through Sundays (like it was at first). But simply Friday chicken, Saturday blackened fish, and Sunday some sort of special. Pretty much whatever he felt like.

It was all more than good.

But some plates were beyond great that it was a joy to eat in Tijuana for so cheap.

And again. That is no longer a thing.

But fear not dear friends, Stu will be back in some sort of kitchen or food projects. In some sort of evolution, just like the Tijuana Adventure, he will get more exclusive and MORE EXPENSIVE!

I missed Saturday’s blackened fish. I was never a huge fan though a lot of people loved it. Peppery fish with a lemon twist. The veggies are what brought me on Saturdays. Stu prepared vegetables in ways that I’ve never had before, so I truly appreciated that shit.

Nah. Saturday was Teléfonica like I said before. Got my usual tuna tostada and the boys got the Tomahawk steak and some flank steaks on the side.

The Tomahawk is delicious, but not worth the price. The flank steaks are way better. Not sure what they do, but I feel like the meat gets a salt rub/massage and that’s why it’s so damn delicious and tender.

Ok. No. That hashtag probably means something else.

And Sunday was the bottle of Buffalo Trace. My buddy Bryan joined in. We drank… .we drank a lot. Until 2:00 a.m. 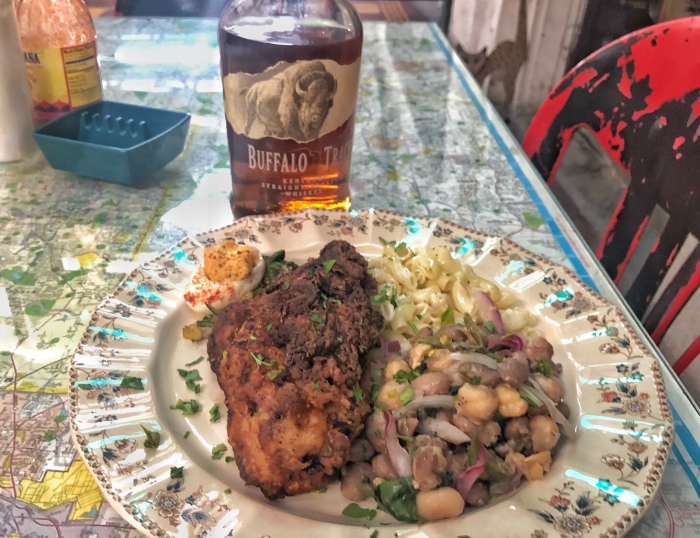 Keep in mind the bottle was drunk around 6 pm at Stu’s.

I forgot to pay him when we left. I messaged him on Instagram and his reply was “Fuck off. You’re good.”

And that’s how you say bye to one of Tijuana’s restaurants.

It will be terribly missed. My Fridays will not be the same anymore. Or my weekends in general. It was a must go to spot…

Oh. And the veggies for the last fried chicken was some sort of minty bean salad (that was my favorite), cold pasta, some chopped chile poblanos with grilled elotes, and a deviled egg!