First of all, I forgot to give special thanks to Joe Moon for taking me to Valle in the first place. Otherwise, I would have never gone.

You see, my brother forgot to tell me that his friends had arrived and that they were going to Valle already… he told me when they were already on the way and said “but join us later.”

Luckily, Joe was going to Ensenada the following morning. After having some bomb ass enchilados from Los Compadres, we made our way to Ensenada. Except, I didn’t know where I was going.

Joe was cool enough to drop me off at the actual awesome Airbnb.

For those who don’t know the ultimate enchilado, it has been my favorite spicy shrimp taco for a long time. Here’s a gallery:

On the last post I talked about Península en el Valle on a Saturday afternoon. Really great food in a very lovely day.

At around noon time, the gang headed to La Cocina de Doña Esthela, widely popular and known as the very cheap for amazing quality.

Before even getting there, I noticed it was PACKED as fuck. One large bus for at least 40 people was parked outside. At least 4 vans for 12-18 people each were parked inside. Another 30+ cars were parked in and outside the place. We parked outside and walked in… to see hundreds of people packed waiting to be served.

At least one or two hours… TO FUCKING REGISTER to wait.

Before even entering I told my brother “fuck this, if we are waiting, somehow I’m going somewhere else.” He got mad for not sticking to the plan… but after figuring out that the wait was going to be massive, we left.

That was the question.

I messaged our trusty chef from our previous night to suggest something.

He recommended Tizne, two friends of him opened the place and he said it was great.

It was a bit difficult to find. It’s also called Hijas de la Tiznada not only Tizne. Google Maps wasn’t accurate, it also said they opened at noon… they weren’t.

It’s inside Viña Emiliana, which was open but not really… it was weird and we were lost.

When we finally found a spot that seemed to be the place, they were unprepared and having a staff meeting. I asked if it was the right place, they said it was. I asked if they were open, and though they said they weren’t they promptly said but we will soon if you guys wait for a second.

The scenery of Viña Emiliana was lovely, but it was also closed, so there was no wine to taste or anything to do but just sit for a while and enjoy the breeze in the hot day. After a while, they received us in the outside restaurant.

I usually don’t like burnt food but I do enjoy smokey flavors.

For the menu, just like Península en el Valle, no drinks, but worse. They had no beer, no wine, just Pellegrino sodas and some stuff that got ignored.

BUT IT WAS BREAKFAST or Brunch time. There were no really options for that. We all got the same thing that was on the special menu.

So we all got the risottos, a couple of sopes (which were tiny), and a ceviche in the middle.

The black little spots is the Tizne. You can never go wrong with ceviche and add the tizne touch to make it extra good. 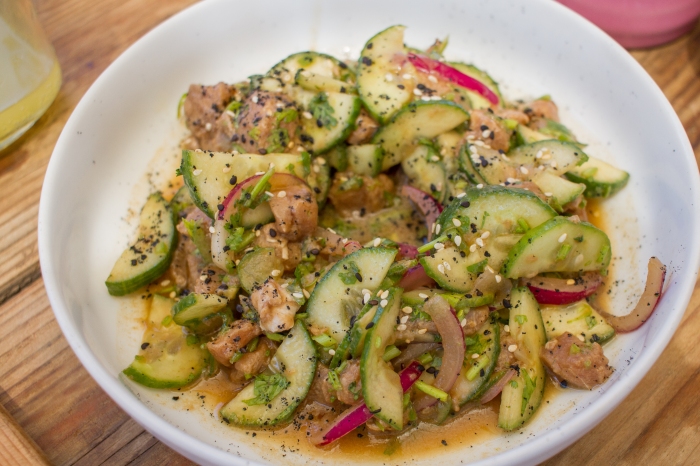 That was the risotto with braised beef ribs topped with tomatillos. 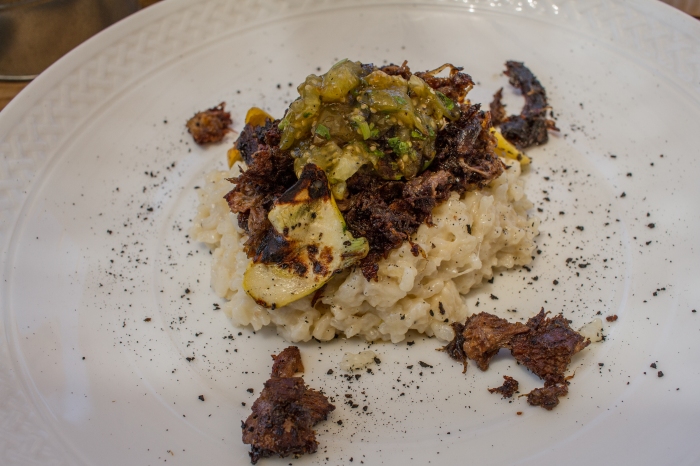 Marc’s risotto looked prettier than mine.

It was good, but not exactly what I desired for breakfast. I felt like I was forced to eat something I didn’t really want just because of the lack of options. It would have been a nice appetizer in a small plate and continue to something bigger.

The tiny tiny sopes with shrimp. Again, really good, but not exactly what I would want or order. The black sauce was delicious.

The best thing they brought us was the bread at the beginning with some tizne sauce they had. I didn’t take a picture of that because I didn’t know it was going to be the best thing… And they only brought us one bread and one sauce (despite officially being two tables). If we wanted more, it was going to cost us. I would have just eaten a bunch of that bread and sauce, get some cheeses, and sip on some wine…

BUT, those weren’t the choices.

With so many restaurants to try, I probably won’t go back, but who knows! I really want to go to Valle more and I am confident that Tizne can be way better.

If Tizne is your thing, then by all means, hunt this place down and try it. If you are not fan of Tizne, then there are many more restaurants to try.

After that, we went to a local tiendita and bought everything to not leave the Airbnb. Beers, meatsies, frutsis, spices, snacks, tortillas, salsas, and more beers!

We didn’t leave the Airbnb that night or the day after. 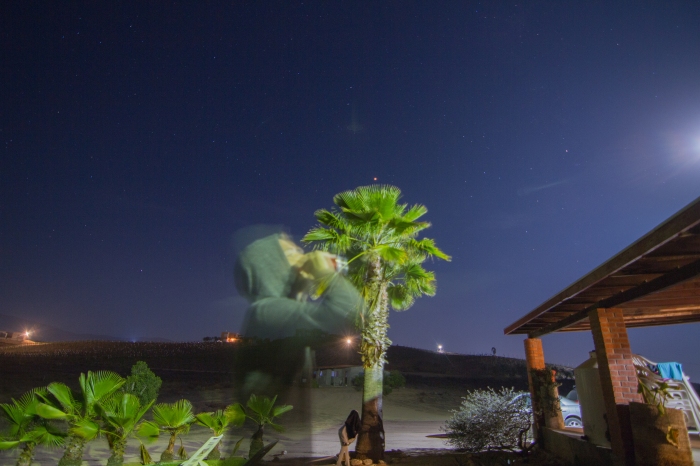 That was my attempt at Astrophotography while chugging a beer. Problem is, the Airbnb had bright lights on either side of the house that ruined my attempts.

A winery nearby has an awesome statue that would make it DOPE as fuck to get some astro there. I want to get the same Airbnb and hit up the winery to let me in at midnight to take pictures (and then sell them the pictures!) Something like that…

Monday in Valle was all pool and beer drinking while grilling meatsies.

We left Tuesday morning and this time we did go to La Cocina de Doña Esthela.

It wasn’t packed anymore, but it was 3/4s full. The waiter acted as if it was packed though. He kept getting the orders wrong (after asking it several times) and kept rushing between tables looking nervous…

But anyway, there we all basically got the machaca de borrego.

We asked for 5 coffees (2 regular, 3 de olla), a round of waters, and two diet cokes. He brought 4 coffees (all de olla), two waters, and an orange juice we didn’t ask for…

It took him almost until we were leaving to bring the beans and the regular coffee I had ask for. He also only brought one diet coke eventually, but oh well. The bill was all over the place….

As for the food, I wasn’t feeling very hungry, and again, not what I wanted for breakfast. The menu had a lot of breakfast items, but they all seem fair standard and the machaca de borrego seemed to be the strong plate. It was ok for me.

I got it in a box to go, threw in a tortilla, mixed all the machaca with the broth and some beans, and left it on my counter at home for a few hours.

I came back to it when I was hungry, AND IT WAS WAY BETTER!

The broth marinating the meat with a bunch of beans truly brought out the flavor… Or maybe I was feeling hungrier. I am not sure, I just know that it was WAY better that way than when I was having it at the restaurant.