Sorry. Sometimes I forget I have a blog and that I said I would be writing more about food. This doesn’t pay me… so that doesn’t inspire me to write much. However, maybe by next year, it will turn a profit?

Not sure how that will work, but I’ll try.

I, however, have posted on the ole’ IG. Not much. Just a handful of things after Tuetano Taquería.

This pasta by Bruno Lazcano in Riochia 7. 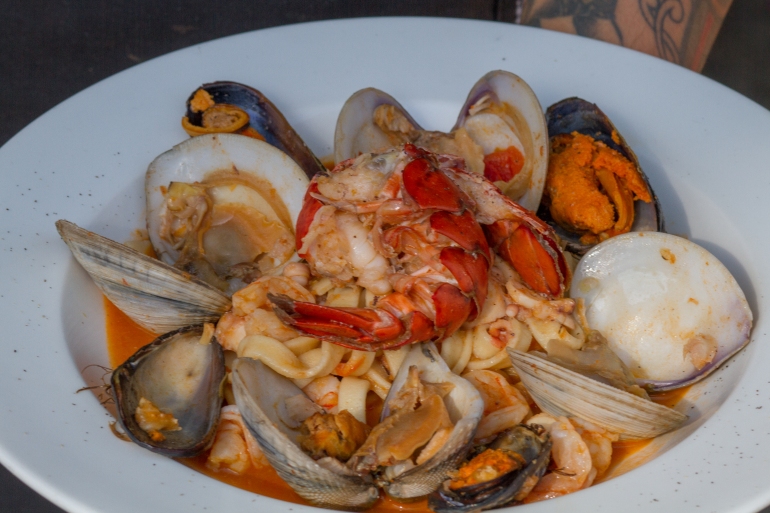 I was out of town for a week, and when I came back the chaos of the city dissuaded me. Then I had amazing craft beer and ate this delicious pasta at @riochia7and remembered why I love this city so much…

Wow. Didn’t say much. I will later since Riochia 7 is worth revisiting to get more food, especially more pasta!

My other post was of La Cevicheria Nais, place that I go often. They have a new thing on their menu that I keep ordering every time I go. 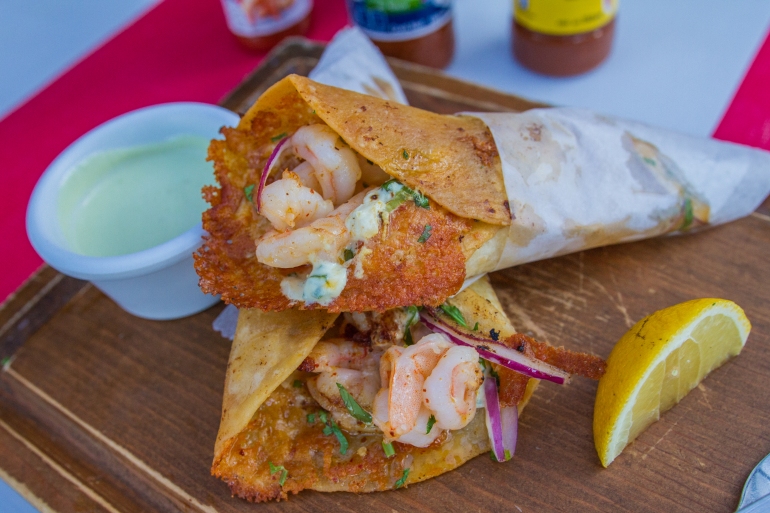 I wrote: Arabian shrimp taco.
It’s pricey. It’s worth it. Only at @lacorrientenais

Short and simple. It worked. Got over 100 likes.

Also, posted some random street tacos. I had just bought a new lens and I wanted to play with it. 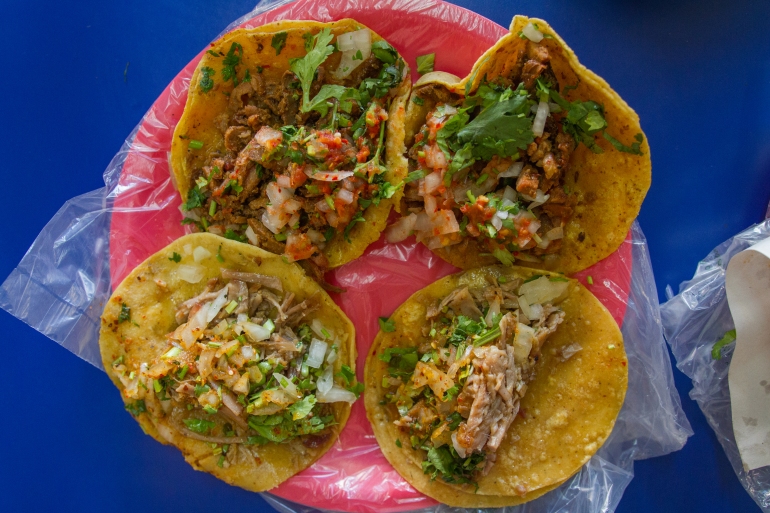 Another short and simple post, I wrote: 2 de adobada y 2 de suadero con todo in one of the countless downtown taquerias. Only $3 for all. Quality. Meh. But filling!

There are so many similar downtown taquerias it’s tough to choose the right one. For the most part, they are all decent and cheap.

Then… for the first time in more than a year, I went to Oryx Capital. It was delightful. I went with a girl who I started to date and quickly dissipated into nothing (but for my personal shit, I have my other blog). 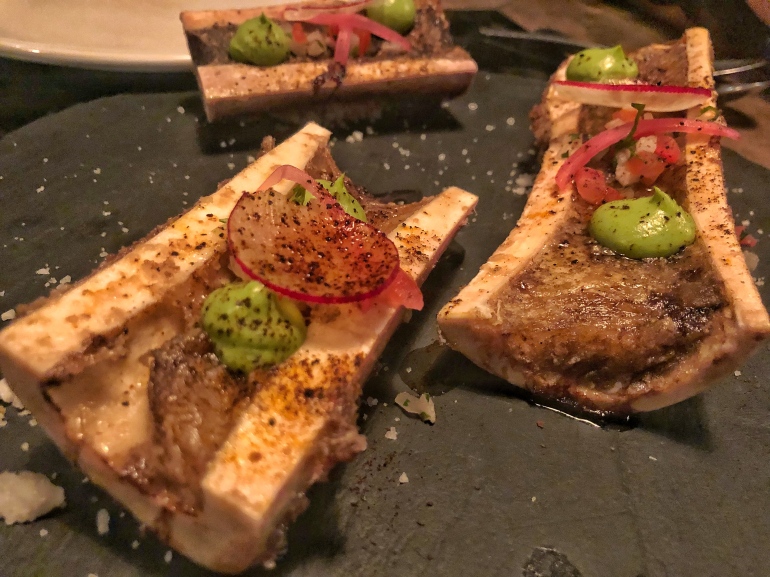 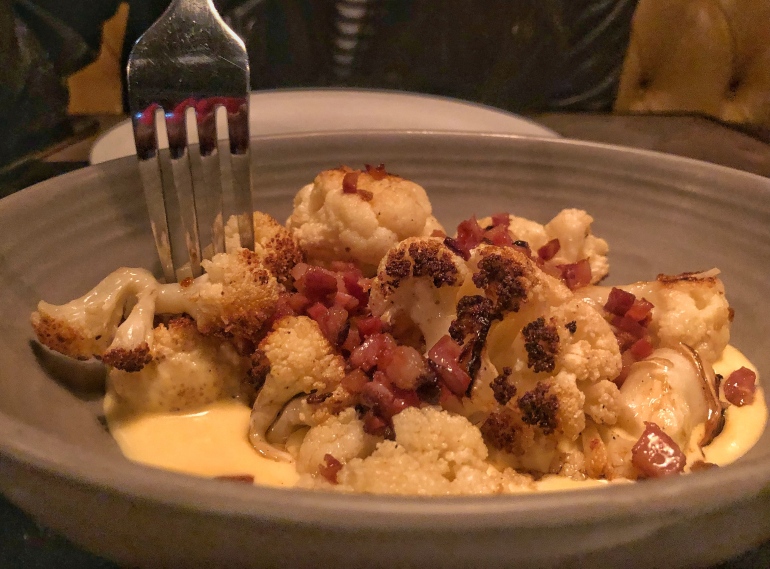 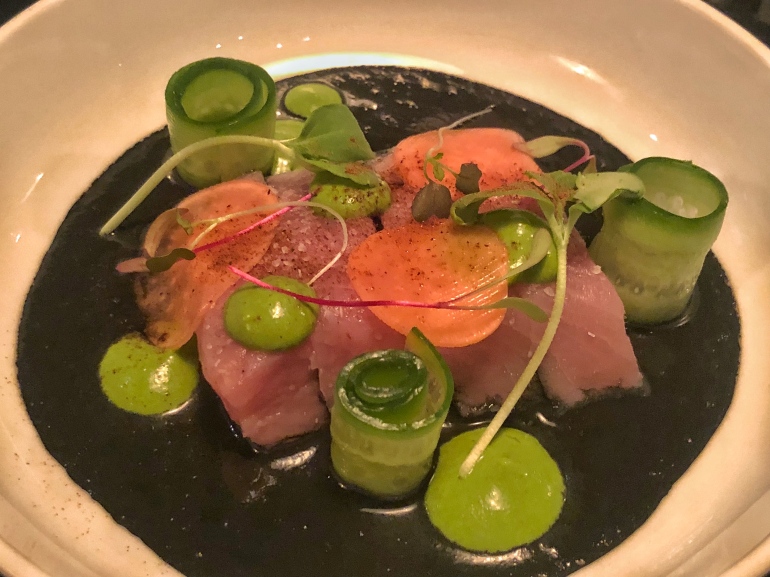 I wrote: I haven’t gone to Oryx in a long long time (over a year). I am glad I visited them. The bone marrow is as good as Plascencia’s in Finca Altozano, Yellowtail aguachile with squid ink and serrano is superb, and the roasted cauliflower with cheese+bacon be a tasty tasty thing.

It was seriously really fucking good. Obviously on the pricey side. Worth it. 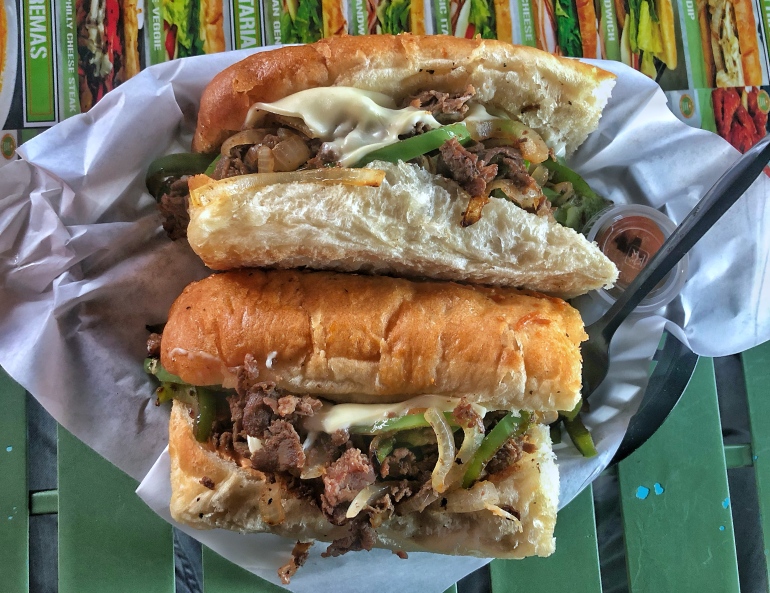 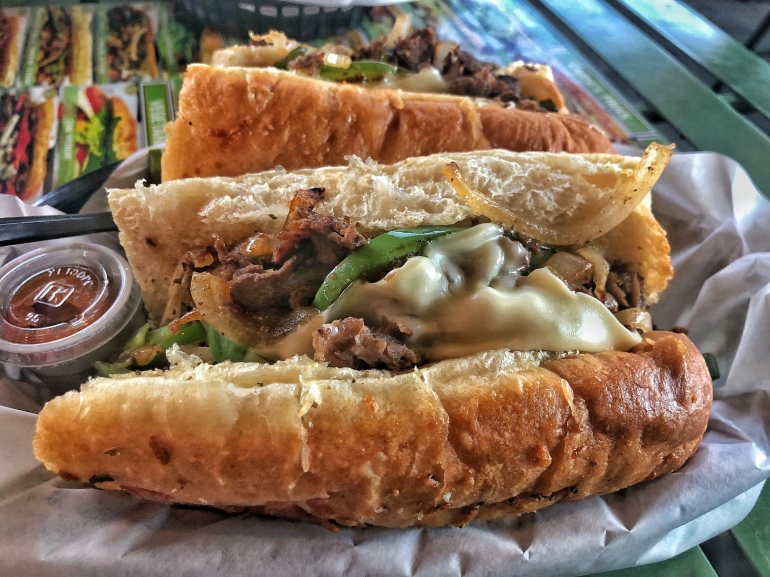 That’s what I ordered.

Ordering a Philly Cheesesteak in Tijuana. Or actually ordering any type of sandwich in Tijuana. I don’t think this city can do tortas very well and there are not that many sandwich options around.

I got two halves for 190 pesos, one Philly cheesesteak regular, the other had chipotle (and no cheese). The regular cheesesteak was better, but it was nowhere a true Philly. It’s not like I’m an expert on cheesesteaks, but it wasn’t as cheesy or beefy as I would like. Green peppers and onions were great. The other thing that was damn great was the bread. It was nice, soft, and warm, with some fluffiness to it, and well seasoned. Bread was fucking killer.

I couldn’t finish them in that sitting. Left them home and they retained the taste (or perhaps improved) while I wolfed it all down when I got back home from the bars.

And this place offers a HUGE VARIETY of sandwiches and others on their menu. Chicken sandwiches, cold cuts, vegan, wraps, salads, and massive carne asada fries. Usually, when a place has too much in a menu, not all of it’s good. The Philly cheesesteak was more than decent, but nothing something I will go back for.

I am curious about other sandwiches though.

Oh. But I will probably order it to go. They took a while to prepare the sandwich and while we waited they blasted horrible pop music that made it difficult for me to stay there. 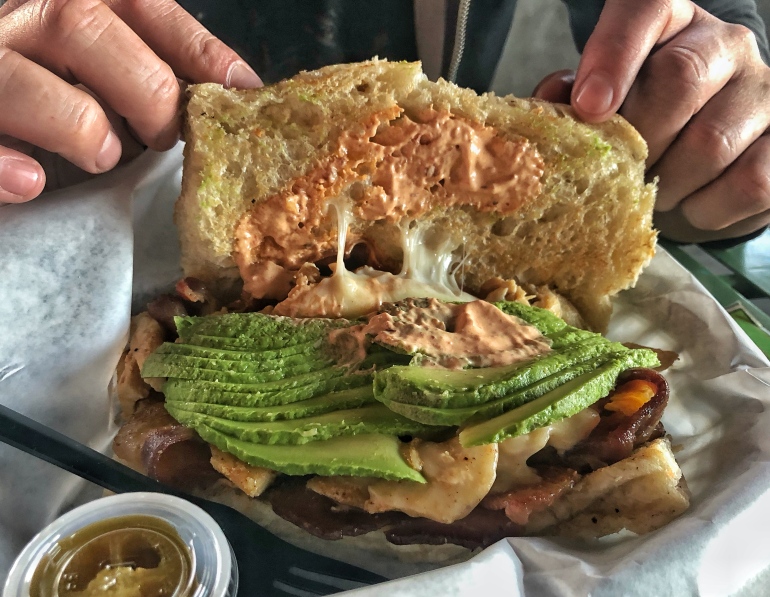 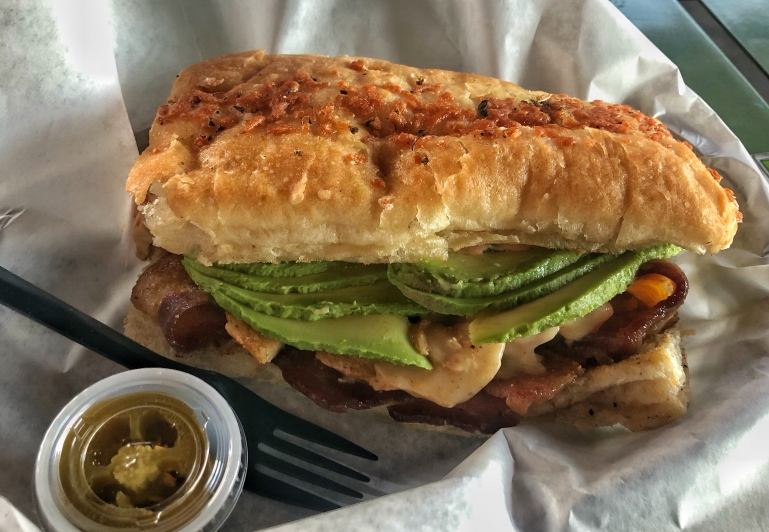 I went with a friend and that’s what he ordered. Eww. Avocado.

I tried pieces of chicken and bacon. Bacon was better than your usual shitty supermarket bacon, so that was nice. The chicken was just your shitty pieces of chicken, grilled with little to no flavor.

My friend said he probably won’t go back or maybe in more than a year. He wasn’t disappointed but also not impressed.