I am typing this at Fauna in Plaza Fiesta waiting for an anniversary burger, drinking a Lycan Lupus. There is a lot in my mind. It is all work related.

My birthday was chill. I am now 30. My brother and his wife gave me a beer guide of Mexican craft beer. There is a lot to read and learn. I also got tons of fancy spices from my cousin in Seattle who works at World Spice. More to try. Excited to try all.

Like every week, I drank a lot of beer. The surprise of the week happened on Sunday.

I had a mini Tj Adventure with friend/co-worker Andy. He came down with his girlfriend and his girlfriend’s boss and husband. We started at Cevicheria Nais, then Nelson and finally Plaza Fiesta. We drank IPAs at Paralelo 28 and then Andy wanted pizza from Mamut.

I wasn’t excited about Mamut and suggested against it, but we ended up there. Surprise surprise! Mamut was pretty damn good.

I got an American pale ale, it was decent. Definitely better than many Mamuts I’ve been having. I also tried their hoppy wheat. It had more of an IPA taste than a wheat. Also surprisingly good.

Pizzas were also way better. We got the Oaxaqueña and the Tijuaneada. 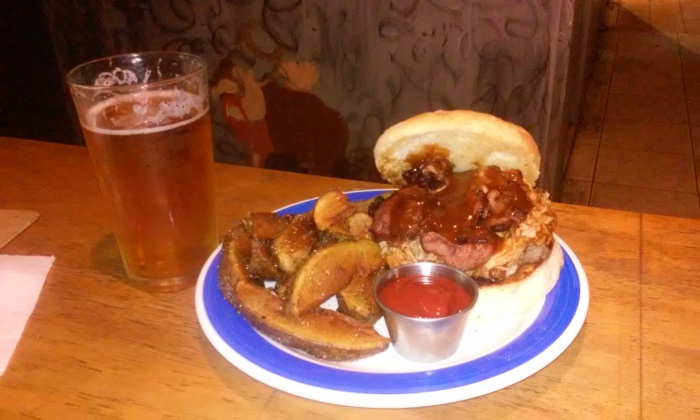 (cellphone potato pic)
Burger was a meaty tasty disaster, but way too salty. I ate 82% of it and gave the rest to Lex, the beertender in Tigre that recommended it.

I am now drinking my second American IPA from Ludica called Pinball.

It’s funny that it’s an American Indian Pale Ale. IPAs deserve a better name, but I guess it works.

I’ll finish this later, Chad and Bobby just got here.

Andy is an amazing photographer and every time he comes to Tijuana he works magic. Here’s the full album of his Sunday. I joined halfway through this:

The Pinball IPA at Ludica is great and my favorite in Tigre right now. I loved their Seven Seas brew, but they are not doing it anymore. I asked about the hops in the Pinball and I believe Cascade and Mosaic (and another). But I might be wrong. Bare with me while I venture to learn more about hops and try to recognize them by blind taste.

Like I mentioned before, I also had a lot of other beers after my last post. I went to Madueño and Silenus and took pics of the beers. My mistake is I didn’t take notes.

I had this, which I think was a pale ale. I remember it was good but on the sweet side. I went with my friend Justin and he got a Porter on Nitro (I believe). It seemed like the nitro wasn’t connected. Had no foam or bubbles or anything. Taste was there, the nitro… wasn’t.

Oh… and I put the Indio in there as a joke. I made fun of people who go to craft beer tap rooms and ask for what they can get in a normal dive bar. I mean.. it’s cool. I was at Chips yesterday (my favorite dive bar) drinking Indios. I like Indios… but WHY would you go to a tap room and not get their beer?! I don’t understand this logic. Is like going to a restaurant and asked them if they can bring you some Sabritas.

Silenus as always did not fail. Both beers were delicious. If I remember correclty, Black IPA and Xanthos IPA. Strong brews, with a bit of syrupy taste, but excellent nonetheless.

I kicked Justin’s ass in MarioKart. He cried. He stopped playing. I want to play more. It’s Tap Tuesday today, might as well go to Silenus and play SNES. Street Fighter challengers, step right up.

I also went to BCB with some friends on a Friday. The place was PACKED. I didn’t even know they expanded. And WHOA the prices. Seriously?! No pictures here because I didn’t think I would be writing about it. Got Lupulosas. Took the stereotypical selfie everyone gets in this place.

(Lol)
The girls I was with ordered seasoned fries (they were bleh fries). We had to keep asking for more ketchup because they give you a tiny container with a buttload of fries. They also got some mushrooms that were ok. Nothing special.

We were sharing one of those large tables with strangers. There were lesbians on a date (one with a very distracting cleavage). They were getting all sorts of food. THEY DIDNT EVEN FINISH IT. They got the whole meat and cheese plate and some chicken wings. None of them looked extraordinary special, but there’s no way you can fuck up a plate of cold cuts and cheese. THE GIRLS LEFT MORE THAN 25% UNTOUCHED!

I also went to In-Ko-Pah 3 on Saturday. Justin grabbed a shit load of Ballast Points. I didn’t know this, his brother works there. So… SCORE! We also stopped by an Albertson’s before camping.. and holy selection!!! I ended up grabbing a 6-pack of randoms for $10. Justin still has like 4 of them.. which reminds me… I should go to his place soon.

For more info on that… I posted on my personal blog what went down.

Finally.. I went to MAMUT again yesterday. And I feel like talking about Mamut.

Yes. Last time I talked a bit of shit about the place because sometimes their brews are horrible. But Mamut has done A LOT for the beer scene in this city. I remember when it first appeared, beers were going for free, then 10 pesos, then 20… So yeah.. it kinda feels like I’m getting robbed paying 60 pesos for it in Plaza or the actual place, yet I can pay 40 for the original location. Which I guess it’s cool.

I know Juan José since he started. I always believed in Mamut and craft beer in Tijuana. He has always been an awesome guy with me. Many times offering his newest batches for free. I have seen Mamut grow from a baby to what it is now. It has expanded insanely quick to include mezcal, wine and food. For a time, Mamut hosted other restaurants and brewers.

Kitchens, cooks, brewers, beertenders, waiters, everyone has come and gone. Staff doesn’t recognize me anymore because they are all new. They only one that stays there is Chapo, the loyal sidekick with a great attitude and a passion for beer. So yes… Mamut can be shit sometimes, but it can also be great. And overall, it’s a fantastic place and I know that Juan Jose has Mamut because he loves beer (yes, more than money).

Like I said. Mamut is a rollercoaster. It has its ups and downs. Sunday, the new pizza convinced me that the kitchen is doing quality now (it was never bad, it was basic and cheap). Their beers were also damn good. So I went again yesterday to the one upstairs.

I wanted Lupulosa, but they ran out. I got the hoppy instead, with the 50/50 burger. I also wanted to try the hot dogs, probably soon. Hoppy Wheat is their best beer right now (not pictured). It tastes like a nice and light pale ale, with not much wheatiness to it, probably single hop.

AHH you can’t even see the meat in the picture WTF?! The burger is small for it’s price and when I took my first bite, the meat was pinkish and seemed raw. I’m not going to lie… IT WAS GREAT! Not the best burger in town, but damn good. I guess the pinkish comes because the bacon is mixed into the beef. It had baby spinach and I believe arugula as well. But my favorite part is… YOU CAN TASTE THE CHEESE. So many burgers make it so meaty that they forget the cheese is a very important add-on. I forgot to read the description, but I’m guessing it was Mozzarella…

After that, I went to the downstairs original Mamut for cheaper beers. Fuck damn… they didn’t have the hoppy wheat 😦

Ok… Let me try the Doble Red and the Amber Ale.

UNDRINKABLE. Or at least for me. They tasted like cough syrup mixed with tonic water (in a horrible fashion). Both of them tasted bad, with a slight difference of bad. I mean… I usually don’t make assumptions based on a little tiny sampler. I like to drink the whole pint, make sure I get to know the whole beer (not only how it tastes, but how it makes me feel). But yeah… There was no way I was going to waste my money with those beers.

I got the Barley Wine. It wasn’t great, but it wasn’t bad. It was straight up decent. Friend got the Imperial Stout. It was good, not much to say about it.

Funny story: while drinking them beers in Pasaje Rodriguez, a cholillo walked by and said “Hey man! Do you play Magic!?!”

HAH! Holy fuck! I do! I mean… I haven’t in forever. But I used too. So he takes out two packages from his bag-pack and says he will sell them to me for 100 pesos. Yes. The cards are most likely stolen from Plaza de la Tecnologia. Fuck it. I’ll buy the three booster packs for kicks. Here they are:

If you have a store in that Plaza, you have some merchandise stolen, and you happen to read this. You can have them cards back. I know … I know. I already opened them. But hey. It’s better than never seeing them again (there’s two that are valued over a dollar).

After that, Norte Brewing Company for some of that delicious Penthouse. Bumped into more friends and some people visiting from Mexico City. And … we continued the night to Chips.

And now here I am. Typing all this crap. I said I would do it more often and then waited a long ass time to do it. Now this post is ridiculously long. No one reads this much. But fuck it. I wanted to start writing more and more.

ITS TAP TUESDAY! So I’ll go drink beer and write some place else that is not my apartment.

One thought on “Beers, Tours, and More Beers – Mamut Redemption”